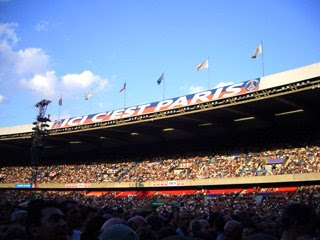 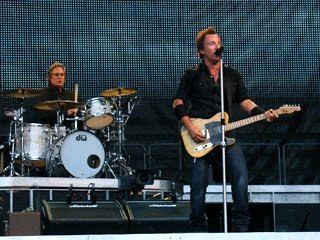 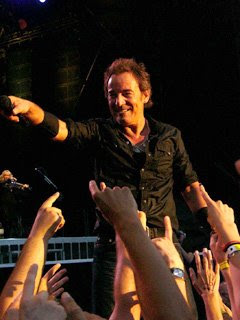 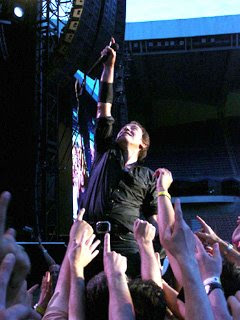 Despite a muddy sound, the Paris show was great, with a crowd in a good mood and ready to party, and a setlist full of surprises.

A really strong "Adam Raised a Cain" as opener, a fantastic "Spirit in the Night" with Bruce going from one side of the stadium to the other, cheering with fans while singing... And then the requested songs like "Rendezvous," "Janey, Don't You Lose Heart," and the solo piano "For You" introduced in french: "je suis venu pour vous" (I came for you).

After "Mary's Place," Bruce picked and showed a sign for "Fire," but Max didn't see it correctly and started to play "I'm on Fire." The others kind of followed, but Bruce stopped them instantly, saying: "Not 'I'm on Fire' -- 'Fire'!" Good fun all around.

During the encore, Elliott Murphy guested with his son on "Born to Run" and then alone on the last song of a show that clocked in at almost three hours.
Publicada por Antonio Miguel Matos à(s) 5:44 da tarde